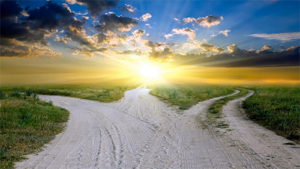 Hello again. I hope you enjoyed reading about my Humble Beginnings. Now I want to talk about the different paths that I have followed. Like many, I did not always follow the right path, which is the one laid out by God for me to follow. Growing up, I knew about God, but I did not have a real relationship with Him. Even when I started to get closer to Him, I still was not following the right path. It takes obedience to follow the right path. I was lacking in my obedience for many years. As a result, I caused myself a lot of pain and heartache, and I wasted a lot of time, energy, and money.

The bible tells us in Romans 8:28 that ALL things work together for good to them that love God, to them who are the called according to his purpose. My life is evident of this and I am so glad that following the wrong path does not need to end in despair and hopelessness. When I follow the wrong path, I do not have to stay wherever it leads me. One path I followed as a teenager led to physical harm from domestic violence, but God turned an ugly situation into 4 beautiful children. Another path I followed as a young adult led to the death of my only son, but God turned that painful situation into a reunion of siblings who had been separated and disconnected for years. Another path I followed after my second baptism (the first one was as a child) resulted in a bigamist relationship, but God turned it around, erased that mistake, and added 2 beautiful souls to my family who will always be my children. Another path I followed after re-dedicating my life to Christ led to deception and a second divorce, but God turned it around and caused my faith to increase and my focus on God to become more purposeful.

Despite the paths I followed in the past, I am now following a path that has been ordained by God, and the end will be nothing short of a miracle. My new path is for the glory of God and I am determined to be obedient on this path, so the blessings of God can flow.

I hope you come back again to learn more about the new path that God has me following. Until we meet again, I pray blessings for your life!